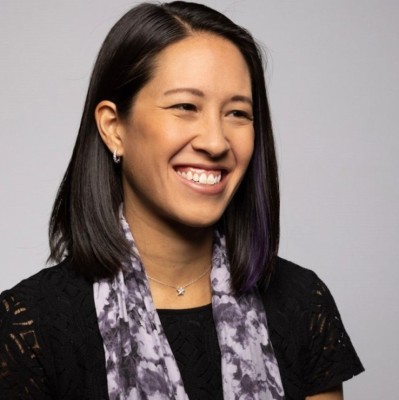 “It opened my eyes to the unfortunate world water situation where millions of people don’t have access to clean water,” she said. “That experience moved me to want to help others. I thought I might be able to tackle the clean water problem with a chemical engineering degree.”

After deciding to attend the University of Illinois, she went to a career fair and landed an internship with Procter & Gamble. At that time the company owned PUR, a water purification brand, which made the internship a natural fit for Flessner.

She worked at P&G in process engineering, packaging engineering, and products research. This is where she found her passion.

“I fell in love with products research because it married two of my interests, technology and people,” she said. “By understanding what people want, I am able to influence the product design. I became a translator, a bridge between real people and scientists/engineers since technical people can have a language of their own.”

She later found a position at Pfizer Consumer Healthcare in New Jersey and was hired as one of its first product researchers. During her five years with the company she has worked on many global brands including Centrum, Emergen-C, ChapStick and Children’s Advil. She works on projects ranging from exploratory to testing early ideas to finalizing products and validating formulations.

“I’m no longer working on water, but love the fact that I’m still in the health care space helping people stay healthy and make their day just a little bit better,” Flessner said.

She is married to fellow classmate Ryan Flessner, ’05 BS. The couple met at the U of I and married after Ryan completed his Ph.D. at the University of Wisconsin. He now works at Merck in the small molecule process development and commercialization group.

They have three children: Jack, age 5; Lily, age 3 and Luke, age 1. “Before kids I loved rock climbing at Red River Gorge in Kentucky and cycling,” she said. “Now I’m mom and all that comes with that title.”

She says Professor Paul Kenis and Professor Marina Miletic had the most influence during her time at Illinois.

“Dr. Miletic was my first female engineering teacher,” she said. “She pushed and challenged me beyond my comfort level allowing me to grow further. She showed me that it was possible for a female to be a leader in the technical world.”