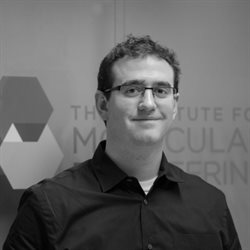 As an undergraduate, he participated in research and was a co-author on two peer-reviewed publications. “Those two papers are testaments that I helped contribute new knowledge to the field during my tenure at Illinois,” he said.

He worked with Professor Chris Bardeen in Physical Chemistry while being co-advised by Professor Richard Alkire in Chemical Engineering. While working in those labs he met success and failure, something he now realizes is part of the research. “Persevering through those early failures in the lab gave me the confidence later on in my career to work around problems or to embark on new projects when existing ones are not working,” he said.

He says the top-notch education he received at Illinois played a prominent role in securing a job offer before graduation. “Although I had a nice paying job in the industry at a young age, I yearned to return to academia,” he recalls. “I wanted to continue working in research and publishing papers.”

Arges is now an Assistant Professor at Louisiana State University where he pursues research in sustainable, economical, and efficient uses of energy and water resources. He said the energy-water nexus represents a symbiotic relationship because it takes significant amounts of water to generate electricity and it requires a great deal of electricity to purify water. Arges’ research group is working to create new electrochemical devices and materials that could help to store or convert energy from renewable and green sources, such as solar and wind. And they’re working on how to generate carbon-neutral chemical fuels and purify water from seawater and brackish water streams.

He chose the academic career path because “I genuinely want to help young people in their professional development and I like to talk about my research to the general public. Without the encouragement and support of others, there is no way I would be doing what I love.”

Arges said his days at Illinois not only included pursuing rigorous undergraduate research and academic courses but developing valuable friendships. “We often challenged and learned from each other while working on homework or studying for exams,” he said. “We still remain friends today. We often like to reminisce about the hard work and the fun times together.”

He and his wife, Hiral Arges (BS ’08) welcomed their baby daughter, Mira, in the past year and they moved from Chicago to Baton Rouge, Louisiana. Outside of work, he enjoys spending time with his family, going for runs and bike rides, and traveling domestically and abroad.