Catalysis-based chemical synthesis accounts for 60 percent of today’s chemical products and is a factor in 90 percent of current chemical processes. Most of these processes are based on heterogeneous catalysis, performing at high temperature and/or pressure. The main challenge of these catalysts is that their reactions’ mechanisms remain difficult to apprehend. Homogeneous catalysis, on the other hand, requires, in general, lower energy input and allows for a more in-depth understanding of the reaction pathway that can, in theory, lead to improved control of the selectivity of a given reaction. The drawback of this soluble catalyst is; however, its recovery from the product’s mixture.

The research in my group will take on the challenge of implementing atom and energy efficient homogeneous catalysts into industrially viable processes. We will do this with a particular emphasis on polymer and fine chemical productions. 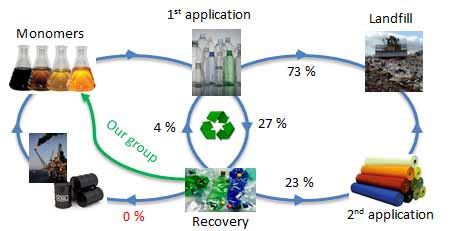 Plastics, which are so prevalent in our lives today, are produced on a tremendous scale and are, for the most part, derived directly from the petrochemical industry. The foreseeable shortage of fossil fuels raises an important question: in 50 years, which raw materials will we use to produce these polymers? One possible answer to this question includes the necessity to improve current recycling processes. After more than 50 years of continuous production of polymers, it would not be necessary to keep producing polymers from petroleum if we could recycle them efficiently. Despite public perceptions of recycling, for the most part, recycling of plastics consists of transforming finished products into less valuable products that are typically not recycled.

This process is called downcycling. For example, PET bottles are recycled into clothes that are later discarded into landfills. One obvious way to prevent this waste involves the development of new depolymerization methods (to recover the monomers) offering endless recycling cycles. My group will address this task by implementing a single approach based on the catalytic post-modification reaction of polymers. We will implement the recent advances in catalysis using polymers as substrates. Later on, we will use the know-how acquired while performing catalytic depolymerization of manmade polymers to bio-based polymers (lignin and cellulose). Until now the selective depolymerization of cellulose and lignin, the 1st and 3rd most available polymers on Earth, has remained a challenge. 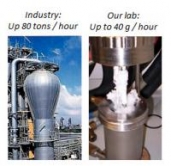 Although polymers are ubiquitous in our life, there is still the need for the development of more advanced and sustainable polymers. Over the past century, much research has been devoted to the synthesis and production of new polymers with tailored properties. One aspect of this research involves the synthesis of end-functionalized polymers and of block-copolymers. In many cases, multiblock polymers have outperformed their analogous homopolymer blends and thus have gained much attention, especially those with amphiphilic segments. These polymers’ microstructures can be obtained by, for example, grafting multiple end-functionalized polymers.

Part of the research focus in my group will be devoted to the syntheses of new end-capped polymers and block-copolymers using polymerization in the presence of chain-transfer agents. Different catalytic chain transfer polymerization techniques will be developed and used in combination with other polymerization methods to yield unprecedented end-functionalized- and block- copolymers. Subsequently, we will use these well-defined polymers to synthesize amphiphilic block copolymers. Some of which will be bio-based and/or biodegradable.