Nanomaterials for Energy and Biotechnology, Electrocatalysis

Shape and composition control of metal and metal alloy electrocatalysts 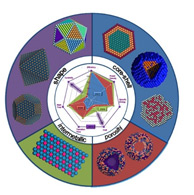 The development of durable and efficient oxygen reduction reaction (ORR) catalysts is key for widespread utilization of low-temperature, polymer electrolyte membrane fuel cells running on hydrogen fuel and air. In the past several years, researchers have developed high-performance electrocatalysts for the ORR to address issues on the high cost of the Pt catalyst per kilowatt of output power and on the declining catalyst activity over time. Our current efforts are focused on new structures (size, shape, composition, and nanostructure) that allow the change of d-band center and the surface atomic arrangement of the platinum catalyst by incorporating a second metal, altering the chemisorption of the oxygen-containing intermediates that have the largest impact on the ORR kinetics and improving the catalyst activity and stability. 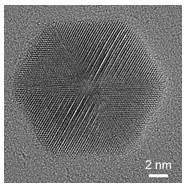 The strong dependence of ORR performance on the (111) surface of Pt3Ni alloy suggests that synthesizing nanocrystals with large, highly reactive facets should be as important as simply reducing the size of catalyst for high activity. In this regard, we developed a carbon-monoxide (CO)-assisted reduction method that is used to produce Pt bimetallic nanoparticles with highly controlled facets. This CO-based approach works well to control the shape because of the selective CO binding on different, low-indexed metal surfaces. Besides surface composition, surface strain also plays an important role in determining the ORR activity. The surface strain depends on the crystal size, the presence of an interface-lattice mismatch or twinned boundary needs to be considered. 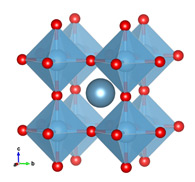 In this research thrust, our goal is to develop a new class of catalysts and electrocatalysts with high efficiency and durability using non-noble metal oxides. Recent studies have suggested new metal oxides, such as perovskite oxides (ABO3) or perovskite-related oxides (ABO3-δ), may be the alternatives to platinum group metals in electrocatalysis. They could have high electrocatalytic activity for oxygen reduction reaction (ORR) and oxygen evolution reaction (OER). Their catalytic performances strongly depend on the intrinsic property and oxidation state of A and B site atoms. A-site ions are typically catalytically inactive in many cases, and B-site ions can directly impact the catalytic behaviors. Thus, tuning of these sites leads to changes in electron configuration and catalytic property. Similarly, ternary oxides should also be useful for other chemical transformations, such as the conversion of hydrocarbons.

Design of nanomaterials for catalysis

Nanostructured materials have been extensively utilized as catalysts. By controlling the size, composition (bimetallic, trimetallic, metal/metal oxide), morphology (facet), and nanostructures (core-shell particle), one can fine-tune surface adsorption energetics, cooperative interaction, and reactivity to meet the stringent requirements of selectivity and activity. Since heterogeneous catalysis is surface sensitive, surface plays a key role in the performance of catalysts. We have demonstrated the control of exposed surfaces by the following means:

Within this thrust, the group currently works on the well-defined metal-on-metal core-shell bimetallic catalyst for selective CO2 hydrogenation.  Our research interest here is to base on the ligand effect in the design and understanding of catalytic systems (e.g., bimetallic core-shell nanoparticles) that promote both activity and selectivity of CO2 conversion to important chemicals. Direct methanol synthesis, reverse water-gas shift, and CO2 Fischer-Tropsch process are some examples. 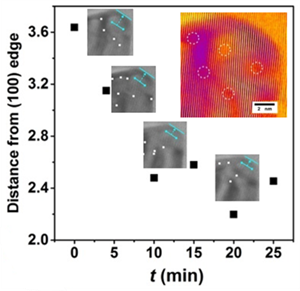 Bimetallic nanocatalysts are proven to be very effective in boosting performance with the optimized surface structure and composition. Utilizing in situ environmental TEM (ETEM), we investigate the structure and composition relationship of bimetallic nanocatalysts under variable-temperature and chemically reactive environments to gain a fundamental understanding of restructuring and other dynamic processes. The in situ data are then used for the optimization of catalyst processing conditions for maximized catalytic activity, selectivity, and stability.

The recent development of liquid flow cell technology and other in situ methods have enabled us to study the growth of nanoparticle and chemical reactions in liquid using TEM with real-time quantitative data for analyzing the kinetics of chemical and electrochemical processes at nanoscale. Current projects include the use of liquid flow cells and electrochemical cells to understand the fundamentals of particle growth and transformation. Such information is important for the design of solution-based synthesis of electrocatalyst for high activity and stability.

We use DFT calculations in the following two areas: 1) understanding the effect of surface capping ligand and atom interaction on the preferred facet formation of nanoparticles and 2) energy landscape of intermediates to gain insight into the reaction mechanisms for better design of catalyst. 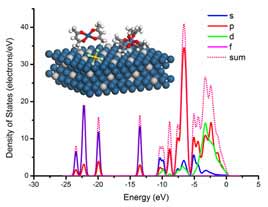 Design of metal precursors. Growth kinetics of nanoparticles can greatly affect the final shape of the products. For instance, twinned Pt icosahedra particles are obtained during fast growth, while it forms a single crystal counterpart in slow growth. Density functional theory (DFT) calculations are applied to study the stability of different metal precursors. Through theoretical simulation, we aim to identify new metal precursors to control the growth of nanocrystals in preferred shapes.

Ligand-nanoparticle interaction. Ligand plays an important role in the shape control of nanoparticles. It has been experimentally observed that surfactant ligands can selectively bind to different crystallographic surfaces, such as (100), (110), (111) and higher index planes. When they adsorb onto surfaces, ligands change the growth of nanoparticles. Thus simulation will be used to examine the preferred binding of various ligands with different surfaces. Such information will enable the design of reaction systems for nanoparticles with different morphologies.

Currently, the production of uniform faceted catalysts is still a big challenge. In our lab, we recently reported a conveyor transport system for continuous preparation of carbon-supported cubic and octahedral catalysts of metal (Pt/C) and metal alloy (Pt3Ni/C) in a single step, with carbon monoxide (CO) as the mediating gas. Highly dispersed nanocatalysts can be formed continuously at different metal loadings. This system is now used to develop continuous production processes of other precision-controlled catalysts with complex nanostructures.