As rivers flow across open plains, they follow an ever-changing course that changes the landscape and composition of the land they traverse. We are developing advanced computational algorithms to study the dynamics of meandering rivers and to predict the geological evolution including the path of the river channels and the composition of sediment deposited by the evolving channel system.

Over time scales ranging from decades up to a hundred years or so, an initially straight stretch of river will develop an exaggerated meandering course as it flows downstream. As the meanders become more extreme, seasonal floods may cause the river to jump its banks, shortening the channel and leaving behind detached isolated sections forming oxbow lakes. At each stage of the meandering process, the eroding bank material as well as sediment carried by the river flow is deposited on the river bottom and on the newly formed inner bank of the river. While the initial time scale of the river migration is typically of order of a hundred years, the pattern of the river channel belt is preserved as successive generations of river evolution bury the original river plain beneath hundreds or thousands of meters of sedimentary deposits. On geologic time scales of 105 to 106 years, pressure and high temperatures convert the organic materials into petroleum and natural gas, while sand and other materials are converted into sedimentary rock. 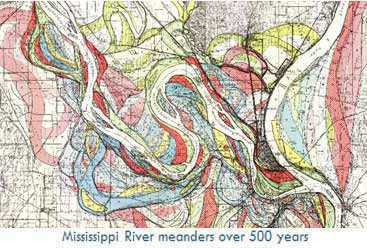 In principle, one might start with a known geological river configuration and predict the future evolution of the geological formations based on sound physical models and known process conditions. In practice, this is not feasible owing to approximations in the physical models and uncertainty in geophysical process variables. Nonetheless, computational simulations provide a knowledge base of plausible scenarios which may be combined with limited geological observations to provide the best estimates of the detailed structure of geological strata.

This information is of critical interest in understanding environment changes associated with natural phenomena, and in guiding the energy industry to yield optimum resource management with minimal environmental impact. 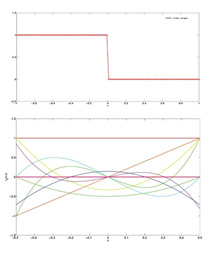 The simulation of multiphase fluid flows in large scale porous media is an important long term strategic requirement for reservoir modeling and simulation in the petroleum industry. A great challenge in predicting the future production of oil and gas from a reservoir is to reduce the uncertainty associated with unknown details of the geological formation, unknown initial saturation of water and organic phases in the reservoir, approximations in the governing equations for microscale multiphase flow and imperfect solution of the final partial differential equations. By combining heuristics and modeling of geological formation processes with reliable reservoir simulations to predict reservoir output, one may formulate an optimization problem to solve the large scale inverse problem and improve estimates of unknown parameters. Solution of this problem provides more reliable predictions of future output and improved reservoir management.

Our group has developed novel simulations for the study of the microstructure, dynamics, and rheology of colloidal gels. A colloidal gel is a system of sub-micron particles suspended in a fluid with interparticle forces such that it behaves as a viscoelastic material – acting similar to a viscous fluid under some conditions and as an elastic solid under others. We have focused on systems with short-range attraction and long-range repulsion induced by polymer depletion forces and adsorbed surface charge respectively. Our simulation techniques approach the accuracy of refined Stokesian dynamics computations with nearly the speed of simple Brownian dynamics algorithms. 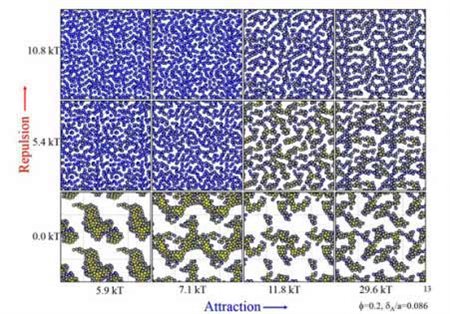 Gels formed under quiescent conditions form an interesting class of materials, however, particle suspensions formed under more complicated circumstances are also highly important in advanced chemical processes. Many novel materials are formed by moving a bidisperse mixture of two distinct particle types through a series of processing operations. These may include spray coating a thin film of suspension onto a substrate, thickening by sedimentation or drainage, further consolidating with rollers or presses, and finally drying operations to form the final solid material. During each of the processes, the suspension microstructure may evolve, particles may partially segregate and the material may develop internal stresses similar to those observed in quiescent gels subjected to rheological flow conditions. Management of the microstructure and microscopic stresses is critical in the manufacture of these exotic materials as suboptimal processing may lead to defects, cracking, or other undesirable material performance. The study of these phenomena under high throughput manufacturing operations is a primary focus of our ongoing efforts in large-scale computational simulations of complex fluids.